skip to main | skip to sidebar

Greetings from Beautiful Mount Hermon, CA, in the Santa Cruz mountains. I'm joined by about 300 other writers amongst the azaleas and redwoods to soak up writing skills, network, and reconnect with friends. 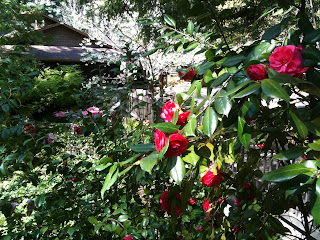 My task this year is to make as many contacts as I can. With two completed manuscripts and another one rattling around in my brain, I'm anxious to get on the publishing trail. I submitted Storm Lake to two agents for publishing review (one got back to me a few minutes ago and wants to talk with me) and have an appointment set up with another on Sunday.

The tag line is getting some attention: "Nothing's quite as peaceful as a mountain lake retreat. Unless it contains your ex-husband--and a killer." 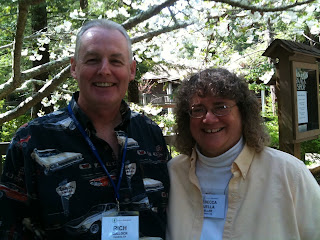 I'm in a mentoring group of eight, led by author James Scott Bell. We each "get" a turn on the Hot Seat where, for 30 minutes or so, we receive feedback and critiques of the others. Humbling and informative--and just a bit intimidating!

Besides the mentoring group, there are 70 workshops from which to choose. That's enough to overload anyone!

I also have two buddies this year--two first-timers who I helped get ready for the conference. Both great guys.

But the best thing about the conference is connecting with friends. Pictured with me is Rebecca Miller. Becky and I met six years ago at Mount Hermon. We've been in a critique group together and she's a great writer of fantasy. You can read her blog at A Christian Worldview of Fiction.
Posted by Rich Bullock at 2:40 PM No comments:

Are you published yet? I get asked this just about every time people find out I'm a writer.

The short answer is: No.

Longer answer: It takes a while. You work on the craft for years, polishing and honing, and then you network and make contacts until the planets align. Right now the planets are crashing into one another.

The publishing world is in upside-down chaos these days, sort of like the Poseidon Adventure, only less fun. Both Barnes and Noble and Borders are hanging onto bricks and mortar book stores, but they are hurting. People are browsing, then buying online from Amazon or other e-retailers. This means they are having a hard time making the building lease payments, which pressures the mall owners, etc.

But what this all really means is books are being sold for less than ever--either p-books (printed) or e-books--from online retailers. Even physical books sold at Walmart and Costco pressure the price. That puts the squeeze on the publishers' profits, which further cuts into the authors' receipts. Pretty soon, it just won't pay to write books. Oh, wait...that's pretty much the way it is now, at least for most authors.

Check out the well done blog on this topic by literary agent Steve Laube: "Is This the End of Publishing?" He has some links to rather discouraging blogs about the state of publishing, but also a very creative video that gives some hope.

Now, does all this doom and gloom mean no one will write books? No. Writers write--gotta do it. It's like a bad habit: once you pick it up, it's hard to put down.

So I'm excited about the new publishing world. We're going to have many more choices of where we get our reading material. Sure it'll be confusing for a time, but the possibilities are almost endless.

And those possibilities take me one step closer to publication.
Posted by Rich Bullock at 11:37 AM 3 comments:

How do you make characters real?
Lots of opinions and methods around this one. Some writers sit in malls and observe people for hours, others record dialogue in restaurant booths or use acting techniques to go deep into the motivations and mindset of the character. Whatever combination of tools, the character must become a real person whose story unfolds.
I joke that I know my characters better than my friends. Sadly, it’s not a joke at all, but I think that’s okay. You see, by the end of a book, I know everything there is about my characters. I know their hopes, dreams, fears, failures, guilt. I know how they feel when someone loves or slights them. Their favorite foods are different than mine, but I understand their tastes and cravings.
What’s revealed in the book is only a small part of the “real” person. You don’t see all the backstory that made them who they are: breaking a tooth in a bike fall as a kid, being picked last for the grade school team, having your toy accidentally broken by your drunken father, watching as a kitten gets run over in the street. Oh, wait...those are all my backstory.
Friends ask me if real people show up in my stories. Well, contrary to all the disclaimers in the front of books, the answer is a qualified yes. My mom shows up a lot. She’s a funny person with a flamboyant personality. Who better to include? However, it’s not really her in the book. I might include a funny line of hers, a mannerism, a story, but the character has different goals and abilities, more or less money, and usually isn’t as entertaining!
Characters are as complex as real people--and as a writer, I have to know them better. The good news is if I get tired of them I can change them or write them out of the story!
Posted by Rich Bullock at 9:07 AM No comments:

Email ThisBlogThis!Share to TwitterShare to FacebookShare to Pinterest
Labels: character

The Kindle is Dead. Long Live the...? 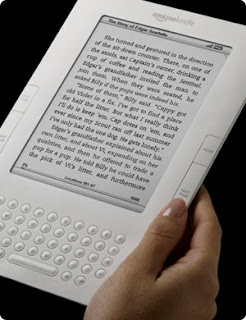 The Kindle: Holds up to 1,500 books, has wireless capability so you can download and begin reading a book in less than a minute wherever you are, thin and light weight. Technology that only a few weeks ago was THE Christmas gift, THE hot ticket. Amazing!

Then on Jan 28 Apple announced the iPad. It isn't even out yet (April 3 according to the commercial seen during the Academy Awards show on Sunday, March 7), but it's already made the Kindle look like a 1972 Buick, complete with clunky design, forgettable plastic, and--horrors--a non-color screen that doesn't even respond to touch.


Search for "Kindle" on Google and "iPad" comes up as one of the sponsored links at top. And, of course, there are at least half a dozen other ebook readers on or hitting the market right now, all vying for the privilege of showing you text and/or graphics. 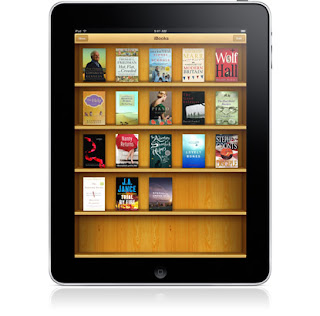 So what do competing ebook reading devices do to the publishing world? Craig Mod has an interesting post on this. He discusses the difference between Formless and Definite content. Essentially, Formless content is what we fiction writers do, a flowing story that could pour into any container (Craig's description), whereas Definite content needs the structure of a consistent physical view, such as photos embedded with the text, or description that refers to adjacent graphics, etc., (think textbooks).


The Kindle does Formless content very well. But the iPad is going to absolutely kill the Definite content space. And, of course, the argument goes: why not have one device that does both?


Just Touch Me
After owning an iPhone for five months, I expect EVERY screen to respond to my touch (even my home heater thermostat a couple of years ago had a touch screen for setting the temperature). Other Smart Phone manufacturers are scrambling to release their next "iPhone killer." Why? A huge part is because of the touch screen interface.


Touching is normal for us. We understand it. It's kind of like ... reading a book! Yes!! We just touch the screen page and turn it to the next one. What could be easier?


But I think Amazon will jump forward. They already bought a company with touch screen technology a few days after the iPad announced. Touchco, Inc has flexible screens, so if Amazon can merge this technology with Kindle, it gives a new definition to stuffing a book into your beach bag.


Bottom line, though, is that it's going to get a lot easier to publish books. The barrier to entry--previously a mighty high wall--will drop to the height of...well the thickness of a Kindle or iPad: 1/3 to 1/2 an inch.


Happy reading.
Posted by Rich Bullock at 10:16 AM No comments: 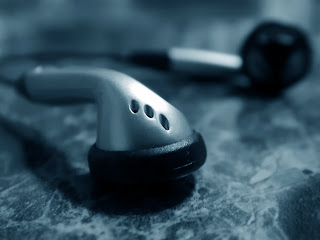 Many people are surprised to learn I write while listening to music. Doesn't everyone? Guess not.

My current book, Storm Lake, revolves around the female lead singer in a symphonic metal band in the Netherlands. During the biggest performance of her life, on-stage during the finale, someone tries to kill her. Now before you go off on several tangents, let me explain. She's originally from Nebraska, so this isn't a "foreign" setting as such. And symphonic metal music probably isn't something you're familiar with. Until I started researching it, neither was I. It's not Aerosmith or Kiss. Symphonic metal really hasn't caught on in America. It's certainly not everyone's easy dining music, but I find it fascinating, especially since there are a lot of references to hell, God, sin, passion plays, angels, redemption, vindication and evil. Talk about great themes! But that's a bit off topic.

Because this music is so much a part of my character's life, I listen to iTunes while writing. For a few reasons:
One drawback is that this does cost me some money because I keep finding cool songs on iTunes or Amazon mp3. Pandora got me started but now is my downfall!

A common question is, isn't it distracting? And do I listen to songs with lyrics. Sometimes it's distracting, mostly because the music doesn't fit the particular scene I'm in, or I'm trying to fix story continuity which is more mentally taxing than character interactions. And no, the lyrics don't bother me. Weird, I know.

I'm not the only weird one out there; quite a few writers plug in the iPod while writing. You might just give it a try. And if you think you're too old to change your ways, I was well into my 50s before I discovered this helpful trick.

I'm one of the lucky ones. A teacher in 2nd grade got me interested in a book, and it's been a life of reading ever since.

Check out more about me and my writing at http://www.richwords.com